Why We Have a Prayer Trail

Background Story to a "Prayer Trail" Revelation . . .  as told by Theodore Beckett

In the late 60’s, Ted Beckett launched a chapter of the Full Gospel Businessmen's Fellowship in Irving, Texas. As president he received opportunities to speak at other chapters throughout the state. In 1968, He was sharing his testimony with the Longview chapter, on a Saturday night. After the meeting a Pastor introduced himself and said, "Brother Beckett I founded a church in Kilgore that I've pastored and now am retired but I still arrange for speakers". He continued, "the Lord spoke to me clearly that you're to speak for us Sunday morning and Sunday night as well”. "Will you come to Kilgore?"

After a quick prayer it seemed good to the Lord and to Ted, so he agreed. He spent Saturday night at the pastor’s house and spoke in his church Sunday morning about God and the ministry of Angels, and in the evening service, about Satan and his minions. Both messages were well received. Kilgore is an amazing town in the heart of the East Texas Oil Patch, where the state began its historic petroleum domination. This church was distinctive due to large oil derricks located all around it.

After the first service, the pastor’s wife fixed a large meal and then the pastor gave Ted an option. He could either take a nap before the evening service or he could accompany him on his routine Sunday afternoon visit to his Glory Trail. Ted said, "That's no option, let's take the trail”. They drove off and came to a cul-de-sac in an empty subdivision that had been cut out of the dense East Texas forest.

They got out of the car and started walking into the forest when a loud bang shattered the silence. It sounded like a shotgun blast and about 30 seconds later there was another bang. Ted thought somebody was shooting at them. Seeing his concern, the pastor took Ted over to an old oil well in the woods, that had been there’s since the 30’s. 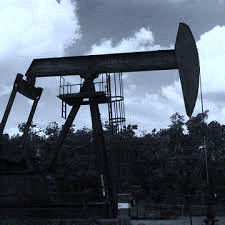 It had a big pump jack that was going around and around and had a cylinder on it. Each cycle would draw a little natural gas off the well and fill this cylinder. When the jack arm reached it’s apex a spark ignited the gas in the cylinder causing the bang and driving the jack around once more. The periodic bangs gave the feeling Ted was in a war zone.

They proceeded another 50 yards into the forest into a small clearing where there was an old car seat plus a tarp that could be utilized in case of rain. The Pastor told Ted this was the starting point for his Glory Trail and explained how he used it. The Pastor had ten 4 inch sticks in a bucket nailed to a tree. Starting at the clearing there was a 1000 ft. trail that went in a circle taking about 4 minutes to make the loop. The East Texas Glory Chief handed Ted a set of sticks and off they went. After each circuit he would drop a stick in the bucket and when they ran out of sticks the prayer journey was done. The first circuit began with praise and worship quoting Psalm 104:4 -

"Enter His gates with thanksgiving and His courts with praise; give thanks to Him and praise His name.”

The Pastor put his second stick in the bucket and started praying for his family, his church, and for needs in the city of Kilgore. He prayed for sick folks and all the other issues that burden pastors. Each time around the trail he’d have a new subject to pray for. And Beckett sensed the power of God in each of the circuits. Somehow he was able to pray with more clarity on that trail than sitting or kneeling.

The next eight circuits would focus on specific prayer objectives that were relevant for that day and would include issues of intercession for the 7 mountains of societal influence, e.g. Arts & Entertainment, Business, Education, Family, Government, Media, and Religion.

It was a wonderful experience to be able to be out in God's creation and walk and pray. And with the sticks he didn't have to keep count when you ran out of sticks you were through praying. If you had more stuff to pray about you could grab the sticks and do it again. The experience made a profound effect on his life.

Wherever he lived after that experience Ted would make a prayer trail, sometimes on a golf course, a park, or schoolyard. In 1978 he moved to Newport Beach, CA and lived near the back bay where he’d pray and many miracles can be attributed to that time of walking and praying.

Gateway Prayer Garden and its Fountain Creek Prayer Trail will be a place to walk and pray as well. There will be locations representing the Seven Mountains, understanding of different kinds of prayer, and visual representations, e.g., for 1st responders, military, students, teachers, and other themes.